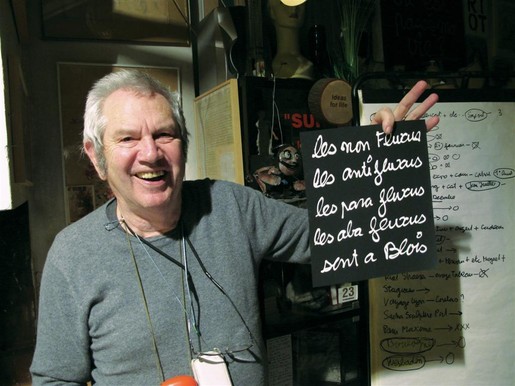 The Event. When George Brecht entered a room and put flowers on a piano as a musical proposal, he was focusing on a form of simple reality. In the history of art, his was the ultimate gesture in favor of the hypothesis that “life is art”. But it was also a way of rendering all things equally important and, more incisively, of confronting the future artist with an ineradicable example of non-art.

In music and in theater, as early as 1963 Fluxus had the public participate in the ongoing action. Not a factitious participation, in which the show would go on amidst the public, but a genuine transfer of responsibilities. For instance, Benjamin Patterson would deluge the “audience” with paper, and the “audience” would have no choice but to react.

Entertainment: A Fluxus concert has to consist in entertaining contemporary music. Far too many forms of the latter are boring insofar as they depend on possession by the public of the necessary historical and cultural references. In Fluxus, entertainment as a reaction against culture returns art to its primary function (entertaining), and relegates art history knowledge to the back burner.

Art by correspondence, Mail Art. Starting in 1963, Ray Johnson and George Brecht use what we now call snail mail as a means of transmitting their ideas and their daily routines, by emphasizing mundane quotidian details, subtleties, anecdotes, etc. Mail Art consequently functions as a form of anti-art and non-art, allowing a creator to refuse to play the part of the careerist artist on the art gallery circuit, which he studiously avoids.

Fluxus contains an attitude towards art. It is a radical movement calling art, and at times the human race, into question. Fluxus contains the “Event” of Georges Brecht, for example shaking someone's hand … or cleaning his violin. Fluxus contains life / music action, for example inviting a tango professional to dance on a stage. Fluxus attempts to establish a relationship between life and art, Fluxus contains gags and entertainment, the Fluxus shock is replete with humor.