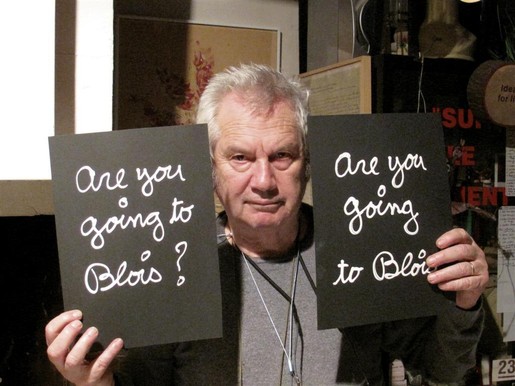 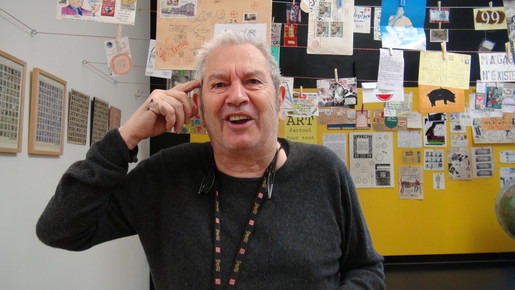 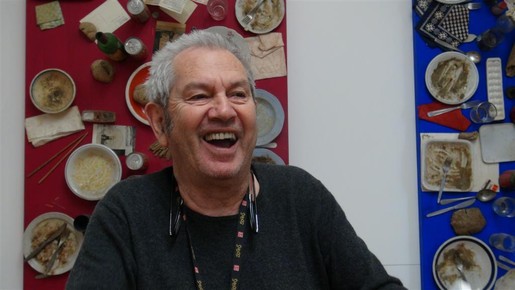 Born on 18 July 1935 in Naples, Ben (his real name is Benjamin Vautier) is a French artist of Swiss origin, whose mother was Occitan-speaking Irish, while his father was French-speaking Swiss. He is the grandson of Marc Louis Benjamin Vautier, a 19th-century Swiss painter. He spent the first five years of his life in Naples. Following the 1939 declaration of war, Ben and his mother were constantly on the move (Switzerland, Turkey, Egypt, Italy), finally settling in Nice in 1949. He studied at the Parc-Impérial primary school and boarded at the Stanislas middle school. His mother found him a job at the Nain bleu (Blue dwarf) library as an errand boy, and then bought him a bookshop selling stationery.

At the end of the 1950s, he sold the store in order to open a small used records shop of which he transformed the facade by accumulating a multitude of objects; the place was named “Laboratoire 32”. Sooner rather than later, it became a site of encounters and exhibitions, a meeting point for the main members of what was to become known as the School of Nice: César, Arman, Martial Raysse... Close to Yves Klein and fascinated by New Realism, he was convinced that “art must be new and provide a shock”.

In the early 1960s, several artists were determined to appropriate the world as a work of art. Ben would sign ... whatever wasn't him (“holes, mysterious boxes, kicks, God, chickens, etc.”), thereby reconnecting art and life, explaining that everything is art and that everything is possible in art. In 1962, Ben met George Maciunas in London and discovered the Fluxus group, of which he decided to become a member. In 1963, in Nice, there was a Fluxus concert created by George Maciunas, and in 1964 in New York, Ben made the acquaintance of George Brecht. By then Ben was disseminating the Fluxus ideas and spirit in France; he had become an ardent defender of attitude art. In 1965, in his store, he created a small (3m x 3m) gallery, “Ben doubts everything”, where he put together exhibits featuring Biga, Alocco, Venet, Maccaferri, Serge III, Sarkis, Filliou...

Since 1975 he has been living and working on the heights of Saint-Pancrace, a hill overlooking Nice.
His house is now a curiosity that can be seen, at a distance, “clinging” to the hill.

In 1975, the museum of contemporary and modern art of the Pompidou center bought the house in Nice, as it had been reconstituted by Ben, and it is now presented regularly, as part and parcel of the museum's collections.

In the early 1980s, after a year of work in Berlin on a fellowship, he met a number of young artists (Robert Combas, Hervé Di Rosa, François Boisrond, Rémi Blanchard, etc.), and named the group Figuration libre (Free figuration).

In 1987, Ben presented his first personal exhibition at the museum of Céret and the Labège center of art in Toulouse. In 1988, Ben exhibited in the C.C.C. (contemporary creation center) of Tours, and in 1991, he transformed the Pompidou center forum into a questioning forum.

In 1995 an initial retrospective was held at the Musée d’art contemporain of Marseille.

Ben's works are now presented in some of the world's most important private and public collections. Highly engaged in the contemporary scene, he still stands up (as he always has) for young artists, and expresses himself on current events, whether they be cultural, political, anthropological or artistic, in his regular and far-reaching newsletters.

In 1995, a public commission was initiated by Jack Lang, at the time mayor of Blois and French culture minister; Ben was tasked with mounting a Wall of words that was subsequently inaugurated. It represents one of the artist's most consequential works: 300 enamel plates composing a retrospective of his most celebrated writing tablets were installed in the facade of the court of the Blois-Agglopolys art school and departmental music conservatory.

In 2009, Ben presented at the Passage de Retz (Paris) “Soudain, l’été Fluxus” (Suddenly, the Fluxus summer), a Fluxus exhibition with his collection. In 2010, a large-scale retrospective, entitled “Ben, strip-tease intégral” was held in the contemporary art museum of Lyon. Ben also exhibited in Moscow with his Fluxus collection.

In 2011, once again in Nice, he set up a site for exhibitions and debates: “Space for selling and debating”. Ben is known for his actions and painting-writings. His production, which is at once a reflection in art and a means of incorporating our daily life in its signature singularity, has succeeded in making life a work of art. Spheres as remote from the artistic field as ethnicism, ego and truth have been afforded places in his work.